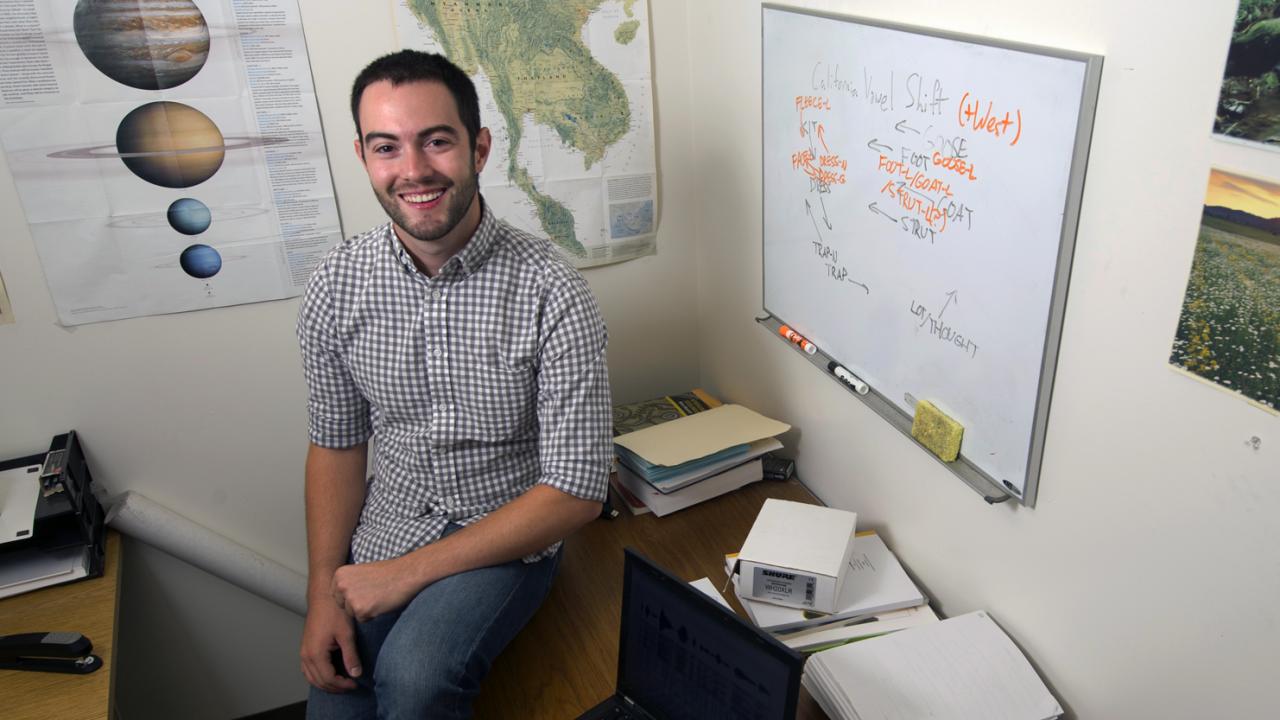 What matters to Dan?

As an undergrad student at the College of William and Mary in Virginia, Dan Villarreal began to notice a common thread when he and his peers exchanged information about courses. “I’d hear: ‘This course is good, but the professor doesn’t speak English,” says Villarreal. A double-major in linguistics and math, he wondered how that problem could be addressed. The more he explored, the more he understood linguistics was just one part of the challenge. It also involved the social issue of languages, accents or speech patterns that communities were exposed to, and of students not accustomed (and/or not willing) to understand the foreign accent of a professor or teaching assistant. Villarreal’s research, which formed the basis of his undergrad honors thesis, traveled with him to UC Davis. Home to students from over 90 nations, and situated in one of the country’s most ethnically integrated regions, UC Davis provides the perfect canvas for in-depth investigation of linguistic diversity and its social impact, both in academia and in the broader scope of life.

Along with the location and the proffered financial support, the interdisciplinary aspect of the program was a considerable factor in his decision to attend UC Davis. “I’m not locked into one subfield,” Villarreal says. “I’m encouraged to explore different areas and take classes in different departments that are applicable and relevant.” Villarreal has taken courses in the School of Education, the departments of French, Italian, Psychology and Philosophy, and the Geography Graduate Group, all of which unveiled numerous perspectives of how to approach the social sciences. For example, Villarreal took a two-course sequence in ethnography, taught by ethnographer Karen Watson-Gegeo in the School of Education. “She got us to expand how we think about creating knowledge—not compartmentalizing the world, but taking the whole world in. I’ve learned that there are many valid ways of generating knowledge.”

Villarreal used these new methods to readdress his interest in linguistic diversity and English comprehension between professors and teaching assistants and their students. He proposed a course that expanded on his undergrad thesis. Over the span of two years, Villarreal worked with professors Patrick Farrell and Vaidehi Ramanathan to organize the curriculum of the new Communication/Linguistics 5, “Global English and Communication,” which launched in spring 2013. “The course gets students to think about how English has spread across the world, especially in recent decades, and how it’s rippled through societies we don’t typically think of as ‘English-speaking’,” Villarreal explains. “It not only fulfills a curricular need, but enhances the course offerings in Linguistics and Communication and—eventually, we hope—the quality of life on our campus, as well as potentially providing a model to other universities grappling with the same problem.” The first offering of Communication/Linguistics 5 transformed the classroom into a laboratory, where Villarreal and two colleagues collected student writing, conducted surveys and tests, and took notes on classroom discussions. They presented the resulting research from the course in March 2014 as “Teaching World Englishes.”

This subject also informed Villarreal’s project with Professors for the Future (PFTF), a year-long professional development program for advanced Ph.D. students sponsored by Graduate Studies. His project tackled the linguistic and social issues of classroom communication by helping international TAs (ITAs) better communicate with their students, and by giving students of ITAs better listening strategies. During the project, Villarreal learned that ITAs initially felt insecure, experienced culture shock and believed their language skills were not good enough, but that many had successfully adjusted and were now thriving at UC Davis. “We wanted to hammer home the point that the newer ITAs weren’t doomed; they can come out of these struggles,” Villarreal said.

Villarreal finds balance through bicycling, listening to baseball, and gathering some peace at the UC Davis Arboretum. He appreciates the community of graduate students who understand both the struggles and the achievements.

Villarreal’s ultimate goal is to follow in the footsteps of the linguistics professors who have shown him that his path is viable. “My ultimate goal in coming here to grad school wasn’t only about gaining skills, credentials and connections, but to really become a part of the community of linguists.” Having been named a Presidential Honorary Member of the American Dialect Society for 2015-19 (an honor bestowed on only three outstanding young scholars annually), it seems Villarreal is reaching his goal.