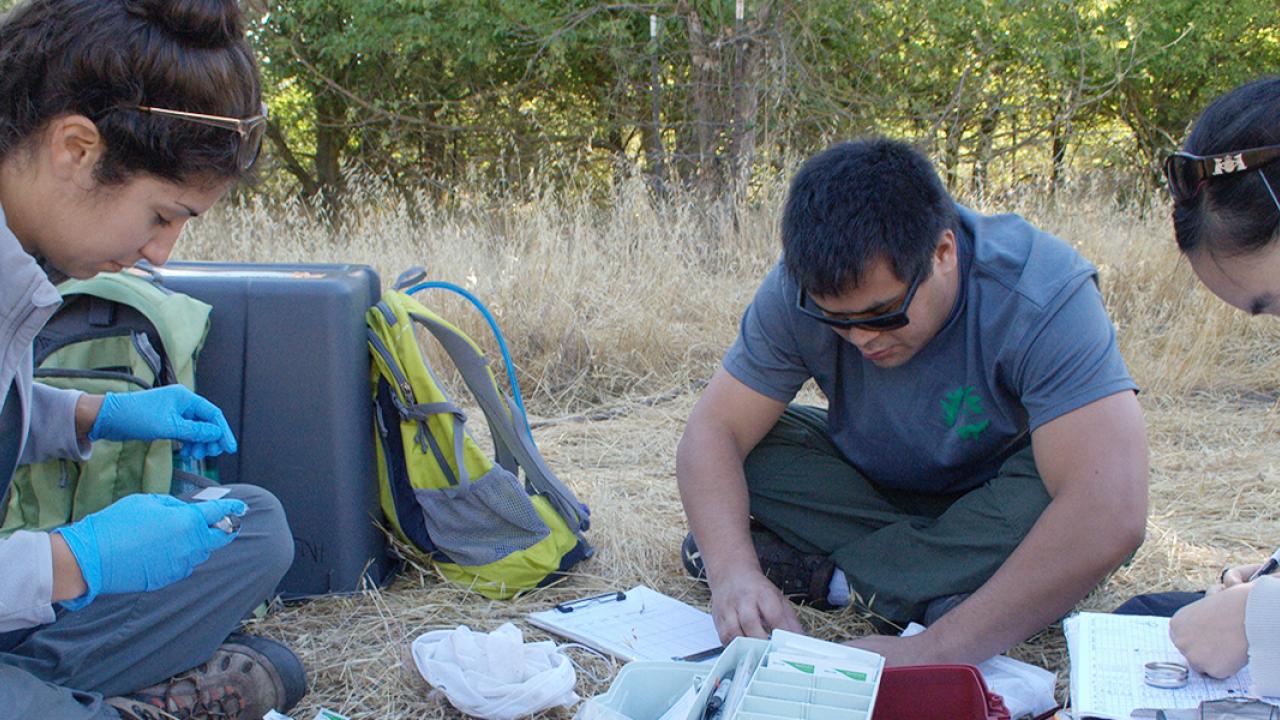 As a master’s student at the University of Michigan, Allison Injaian studied the behaviors of a unique species of wasp. Named Polistes fuscatus, these wasps—much like humans—recognize one another based on facial markings. For an organism with such a tiny brain compared to humans, the mastery of such specialized visual learning was described by Injaian’s advisor and lab mentor Professor Elizabeth Tibbetts as “surprising and sort of bizarre.”

“We were trying to understand how and why that evolved in wasps,” said Injaian, who recently received a Ph.D. in Animal Behavior from UC Davis. “From that, I realized that I enjoyed the behavior aspects of that research, but I wanted to do something more conservation-focused for my Ph.D.”

That desire led Injaian to UC Davis, and more specifically, to the lab of Professor Gail Patricelli, Department of Evolution and Ecology and the Center for Population Biology.

In the Patricelli Lab, Injaian focused her research on the impacts of traffic noise on the tree swallow, a small song bird found throughout North America that nests near rivers and creeks and eats aquatic insects.

“Traffic noise is really widespread,” said Injaian. “Even if you’re in an area that’s not near the road itself, you can still hear noise from afar.”

To test the effects of traffic noise, Injaian identified a population of tree swallows cutoff from the roar of the road. Using speakers and amplifiers, she conducted an experiment which exposed some birds to traffic noise but kept other birds away from the noise.

“If you study birds that are nesting near the road, you don’t know whether any negative impacts are because of the noise, because of the light pollution that’s associated with the road, because of the exhaust from cars, and so on,” Injaian said. “You can’t really isolate out what it is about the road that could be causing the negative effects.”

Injaian found that tree swallows exposed to noise experienced a suite of negative impacts. They laid fewer eggs, and the nestlings that did hatch had lower body mass and reduced feather growth.

In a separate experiment, Injaian found increased levels of corticosterone, an avian stress hormone, in the birds exposed to traffic noise. She is currently in the process of publishing her findings. “It doesn’t give you the whole picture of the stress response, but it can give you some indication that these birds are having physiological impacts because of the noise exposure,” she said.

Read the full story on the UC Davis College of Biological Sciences website.

UC Davis graduate students and postdoctoral scholars become leaders in their fields: researchers, teachers, politicians, mentors and entrepreneurs. They go on to guide, define and impact change within our global community.