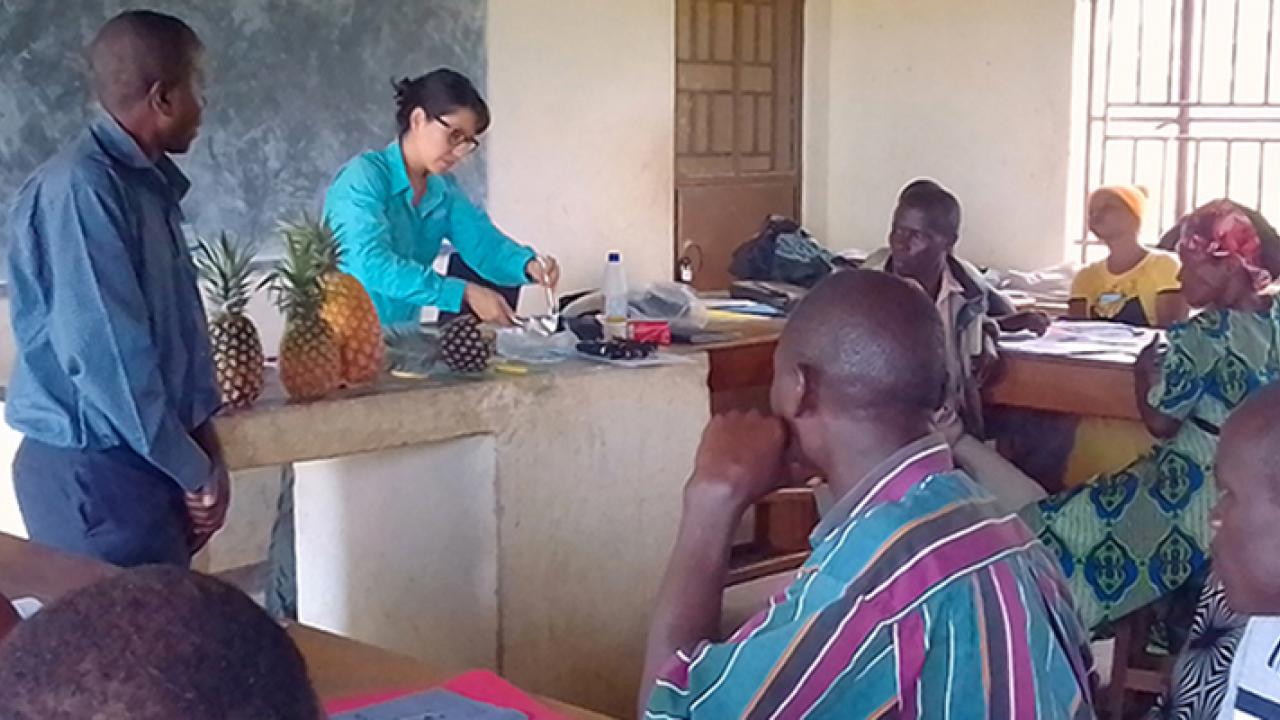 A version of this blog post originally appeared on the UC ANR Food Blog.

In this 2-minute video, Karin Albornoz visits a pineapple farm, leads a pineapple training and discusses next steps for this Trellis Fund project led by NIRP in Uganda in 2017. The video clips and photos were taken by Karin while she was working and edited by Hallie Casey for the Horticulture Innovation Lab.

Sometimes it helps to pause and reconnect with what motivates your work.

For Karin Albornoz — a Ph.D. student studying Horticulture and Agronomy who works in a UC Davis lab on molecular biology of tomato postharvest chilling injury — that means getting out into the world to work directly with small-scale farmers.

“I spend so much time in the lab,” she said. “Sometimes I spend a whole day in the lab extracting RNA or writing a paper. This reminds me why I am doing this work: to make a real-world impact.”

In December, she returned from a trip to Uganda where she did exactly that. In partnership with a local organization called Ndibwami Integrated Rescue Project (NIRP), Albornoz shared her expertise with farmers through several hands-on workshops about improving harvest practices and postharvest handling of pineapple, passion fruit and tomatoes. The project she worked on was supported by the Horticulture Innovation Lab, a global research network led by UC Davis with funding from the U.S. Agency for International Development, as part of he U.S. government’s global hunger and food security initiative called  Feed the Future.

Though Albornoz has worked with rural farmers before, this was her first time working in Africa.

“Everywhere I looked, things were growing. There were people working in the field, women cooking, and everyone was working with food,” she said. “I know there’s a lot of stigma – when you talk about Africa, you see people’s faces change and they’re thinking about things like drought and famine and starving children. But what I saw doesn’t fit that stereotype. The challenges they are facing seem to be about not having access to opportunities.”

The workshops she led are part of the NIRP organization’s efforts to connect farmers with more lucrative markets that pay higher prices for quality produce, through a Trellis Fund project.

About the Horticulture Innovation Lab

The Horticulture Innovation Lab's global research network advances fruit and vegetable innovations, empowering smallholder farmers to earn more income while better nourishing their communities. The program is funded by the U.S. Agency for International Development and led by a team at the University of California, Davis, as part of the U.S. government's Feed the Future initiative.

The program team and its projects help the world's poorest people break out of a persistent cycle of poverty by improving smallholder farmers’ abilities to grow and sell high-value crops. Improving livelihoods — through higher profits and diversified, nutrient-rich diets — is a primary goal for the Horticulture Innovation Lab's research efforts around the world. The program’s work is guided by ensuring gender equity, improving information access, targeting innovative technologies and increasing research capacity.

Horticulture Innovation Lab projects span the value chain of fruit and vegetable production, from seed systems to postharvest processing. Individual projects are led by U.S. university researchers with collaborating partners in developing countries, with funding from $40,000 to $2 million. Collaborations have included more than 18 U.S. universities and 200 organizations in more than 30 countries of Africa, Asia and Latin America. Through partnerships and collaborative research, the program also aims to build the capacity of researchers, institutions and farmers to advance horticultural science.