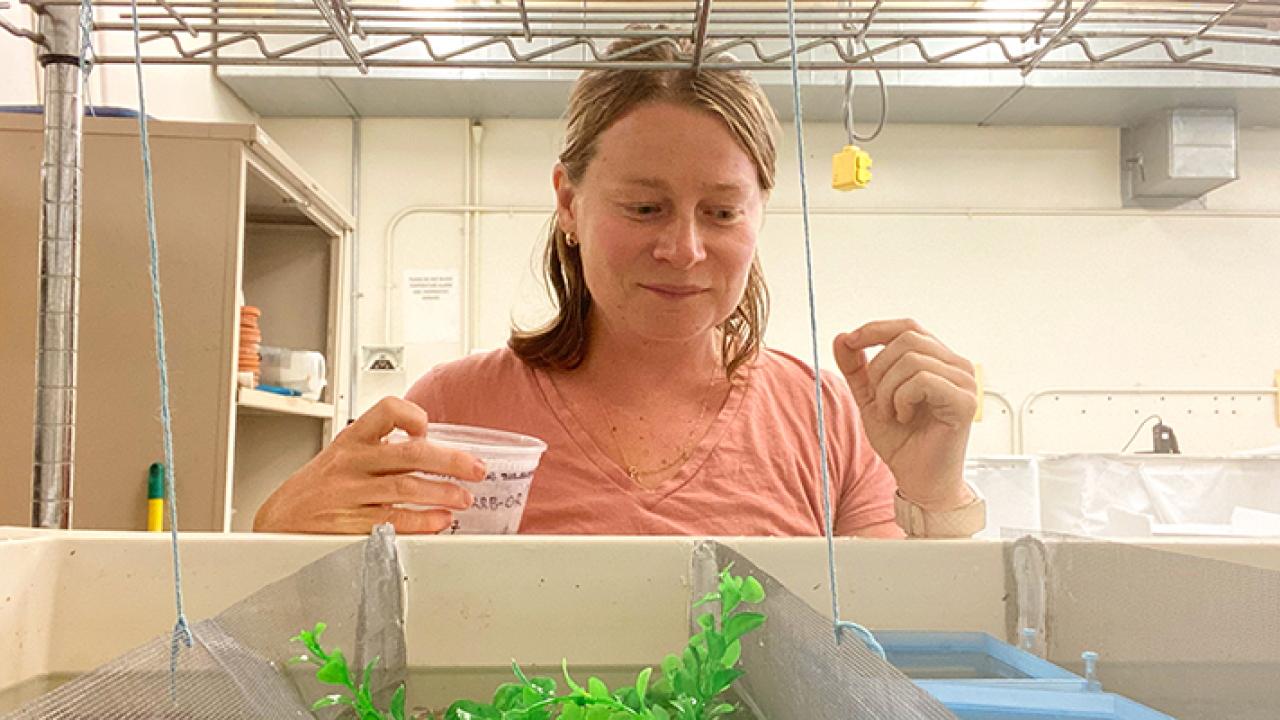 Graduate Studies is pleased to announce Animal Behavior Ph.D. candidate Amelia Munson won first place at the UC Davis Grad Slam final round on Thursday, April 8. Her winning presentation “Fact or Fiction: What Doesn’t Kill You Makes You Stronger” earned her a $2,500 grand prize and the opportunity to advance to the University of California Grad Slam competition on May 7.

Her engaging presentation examined how introducing environmental stressors on young fish in captivity impacted their ability to adapt to challenges and exhibit anti-predator behaviors as adults.

“The three-minute format for Grad Slam is particularly fun for me because the story I tell during this talk is pretty similar to the one that I have been telling for years to Uber drivers, first dates and really anyone else who makes the mistake of asking me what I do,” said Munson.

Grad Slam challenges master’s and Ph.D. students across disciplines to present the significance and fundamental points of their research in a succinct and engaging way. Now in its seventh year, the 2021 UC Davis tournament was held in a virtual format due to the COVID-19 pandemic.

“Winning Grad Slam is such an honor—There were so many incredible talks,” said Munson. “I have been thinking about Grad Slam for a full year, since quarantine prevented me from competing last year. Just getting to compete this year really made me feel hopeful and proud of the whole Davis community for learning to adapt and roll with the punches.”

Despite the pandemic, more than 30 participants were inspired to submit presentations for the qualifying round, and the final Zoom event chat exploded with messages of support from viewers.

"There are benefits to [the virtual format]. My parents were able to come today...and my dog is in my lap. He wouldn't have been able to be in my lap at the actual talk." Munson said at the Final Round Competition while holding her dog Darwin to the camera.

Following her presentation, Munson spoke with the host of this year’s Grad Slam, Graduate Studies Vice Provost and Dean Jean-Pierre Delplanque, about the mentors who fostered her research and scientific passions.

“One of the things I love most about Davis is the community of people that we're surrounded by who can mentor you in everything from academics to just staying sane,” she said.

Munson will represent UC Davis at the University of California Grad Slam Finals on May 7, where she will compete against the final round winners from the other nine UC campuses.

“I am both nervous and excited to compete at the UC level,” said Munson. “I am about to graduate, and UC Davis has done so much to prepare me for my next steps that I really want to make them proud.”

With impressive research presentations from all participants, Munson faced tough competition. The following graduate students received top scores from the judges and finished the competition with their own awards, recognition, and prize money.

This is both Kasemsap and Munson’s second time as finalists in the Grad Slam competition. Watch all the Grad Slam finalist videos.

2021 Grad Slam Was Bigger Than Ever

Despite the virtual format, this year’s UC Davis Grad Slam Final Round had record attendance and voter turnout for the People’s Choice Awards. Additionally, more than $5,750 in prizes were awarded at the April event—the largest amount thus far. The UC Davis Grad Slam Sponsors—The Office of Research, Global Affairs, and Public Scholarship and Engagement— contributed to the awards available to the competitors.

UC Davis Graduate Studies invited judges from the local community to evaluate the students’ presentations. The final round judges were:

“We're incredibly proud of everyone who presented in this year's competition," said Vice Provost and Dean Jean-Pierre Delplanque. “They overcame the obstacles of the virtual format to create an engaging and exciting event for all.”

Be sure to cheer on Amelia Munson at the UC Davis at the University of California Grad Slam Finals on May 7.

Graduate Studies at UC Davis includes over 100 dynamic degree programs and a diverse and interactive student body from around the world. Known for our state-of-the-art research facilities, productive laboratories and progressive spirit – UC Davis offers collaborative and interdisciplinary curricula through graduate groups and designated emphasis options, bringing students and faculty of different academic disciplines together to address real-world challenges.

UC Davis graduate students and postdoctoral scholars become leaders in their fields: researchers, teachers, politicians, mentors and entrepreneurs. They go on to guide, define and impact change within our global community.